Twins Born to Mr. and Mrs. M. Brumfield of Tylertown

Mr. and Mrs. Mead Brumfield, of Tylertown, are the proud parents of twin babies, a boy and a girl, born at the McComb Infirmary, Sunday March 5, 1944. The boy, who weighed 7 ¾ pounds, has been named John Hugh. The girl’s name is Gwendolyn Jane. Her weight was 6 ¾ pounds. Mr. and Mrs. Brumfield have two other children, Terry and Meadette, who are happy over the arrival of the twins. The mother was the former Diane Payne. The maternal grandparents are Mr. and Mrs. J. H. Payne, of Atlanta, Ga., and the paternal grandparents are Mr. and Mrs. Fletcher Brumfield of Tylertown. 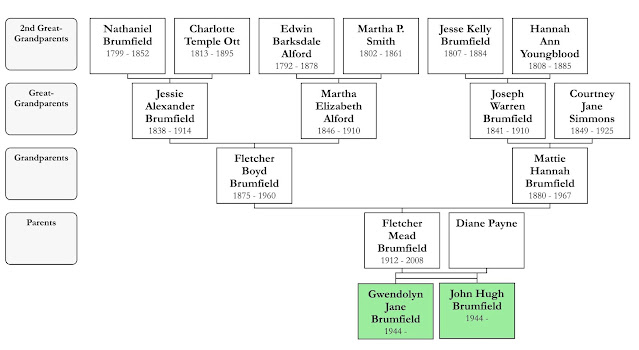