I enjoy finding brothers who served together. I was especially excited to see that one of these brothers was a Trumpeter! Did he sound attack & retreat on his trumpet? How did he carry the trumpet as he rode his horse; on a strap around his neck; in a saddlebag? I get images of a young man in uniform sounding off with his trumpet but I am guessing that the images in my imagination are not close to reality. During a day on horseback the brothers were probably tired, dirty, sweaty and missing their home. But they made a small mark in the history of our country and in the history of our family. 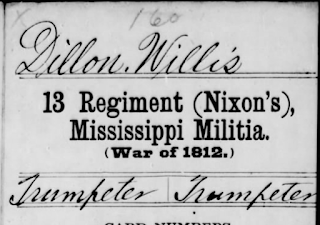 By 1810 [Richard] Dillon was a resident of Amite County (listed in the 1810 Census for that year). In that same year he obtained a land grant in Marion County in a portion of the county that later became Pike County. This was probably the land that became known as ‘Dillon’s Bridge’.[i]

At the time of the War of 1812 the Dillons were in Mississippi. These three Dillon brothers went to the Court House in Marion County, Mississippi on 3 January 1815 and enlisted to serve in the War of 1812. They were in Captain John Bond’s Company, Lt Col. Nixon's Regiment, 13 Reg. Mounted Riflemen of the Mississippi Territory Militia. Clarkston and Theophilus were privates and Willis was a trumpeter.[ii] Company pay roll records show Willis was paid $63.00 for his service from 3 January to 5 April.[iii] Theophilus was paid $60.00 for the same time period.[iv]

[iv] Compiled Service Records of Volunteer Soldiers Who Served During the War of 1812 in Organizations from the Territory of Mississippi; NARA; fold3.com: accessed Aug 2017.