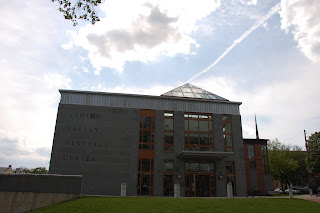 Lehigh Valley Heritage Museum, 432 W. Walnut St., Allentown, PA 18102
When I arrived at the library I had just over five hours to complete my search for Ritter and Keck families in Lehigh County. When my time is limited I try to gather as much as I can in that time frame by looking for the surnames in the sources I identified before I left home. When I find the surname I have the title page and other identifying information along with the appropriate pages photocopied. After I leave I can look more closely at this information, along with my data base of family facts to see if they match. Sometimes this information helps to confirm what I have already uncovered. Sometimes the name is similar but not a match. Once in a while I find a treasure, new reliable information.
The museum library was a very pleasant place to spend the day. There were free lockers for bags and purses. I was one of two researchers working at the large tables. Each table had an outlet in the center for laptops. The librarians were friendly and helpful. They showed me where to find the resources I wanted to use and  they cheerfully photocopied many pages for me.
The following is a list of resources I used at this facility and, briefly, how useful they were for my investigation.
Compiled Family Histories (929.2):
Keck, Eleanor GIlbert. Keck Family. Allentown, Pennsylvania: Privately Published, 1984.
Keck, Lewis. The Keck Family History. Pennsylvania: Privately Published, 1995.
The Keck histories begin with a brief history of our progenitor, Henrich Keck. The first chapters of these histories are almost identical, word for word. From there they branch out to cover their own branch of his descendants. I copied a few pages of each.
Keck, J. A. History of the Keck Family. Privately Published, 1901.
I can access this book on the internet so I did not spend my limited  time reading it.
Compilations of the Ritter Family.
I found that these were basically a long outline of descendants. While it is nice to see such a long list of names and dates there are no sources included.
Knox, Larry D. The Ritter Family. Ohio: Privately Printed, 1999.
I have this book, given to me by Larry Knox and have used it often.
Church and Cemetery Records (284.1):
Blue Church Communicants and Confirmations: Lutheran and Reformed, Upper Saucon Twp., Lehigh County, PA
1762. Hinrich, Johannes, Jurg, & Elisabeth Keck were confirmed. Our progenitor and three of his children.
Military Records (929.3):
Laudenslager, David R. County of Lehigh, Allentown, PA Veterans Affairs Office, Veterans Grave Registration Record. Revolutionary War Veterans. 1. Pennsylvania: 1994.
Found: Casper, Daniel K. & Martin Ritter. Two are a definite match. Found: Andrew, Henrich & Johannes Keck. Most likely all matches.
Laudenslager, David R. County of Lehigh, Allentown, PA Veterans Affairs Office, Veterans Grave Registration Record. War of 1812. Pennsylvania: 1994.
Found: David & George Keck.  Still to be determined if they are ‘ours’.
Laudenslager, David R. County of Lehigh, Allentown, PA Veterans Affairs Office, Veterans Grave Registration Record. Civil War. 8. Pennsylvania: 1994.
Found: Milton H., Samuel, Solomon B. & William D. Ritter.  Three definite matches, not sure about William.
White, Virgil D. Genealogical Abstracts of Revolutionary War Files. III. Waynesboro, Tennessee: The National Historical Publishing Company, 1992.
Copied two pages of Ritter information that I need to look at closely.
Published Histories (974.827):
Schmehl, William L. F. Salisbury. 1976.
A wonderful little book written on the bicentennial year of the town. Includes lists of Keck and Ritter families who lived there. Both families are ‘ours’. Photo of the Keck house, a large stone structure that still stands.
Lower Milford Township, Lehigh County, Pennsylvania. Pennsylvania: 1976.
General information on early settlers. No specific mention of Keck or Ritter.
Mathews, Alfred, and Austin N. Hungerford. History of the Counties of Lehigh and Carbon in the Commonwealth of Pennsylvania. Philadelphia: Everts & Richards, 1884.
I copied several pages. Many Keck & Ritter references I will look at more closely. The book      includes information on Rittersville, PA.
History of Lehigh County, Pennsylvania and a genealogical and biographical record of its families by Charles Rhoads Roberts et al. (Allentown, 1914)
These volumes are packed full of information. It is available on line. Not sure if all three volumes are online.
Other:
Lehigh County Historical Society, First. Register of Wills, Declaration of Deaths for Lehigh County, 1852 - 1855. 1986
Found Ritters. John Henry Ritter (1780 - 1854) found. Michael Ritter, not sure if he connects. Stephen Ritter, might be the son of John Henry Ritter.

I would count this as a successful trip to the Lehigh Historical Society. I'd love another day there! Meanwhile, I will analyze the above information more closely.
Posted by Colleen G. Brown Pasquale at 4:00 AM