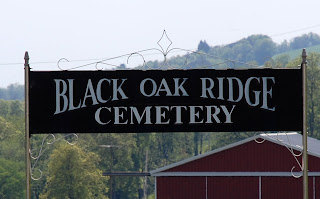 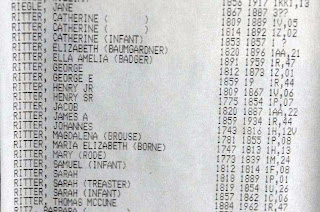 Johannes and Maria Elisabeth (Keck) Ritter are my fifth great grandparents, related through my paternal grandmother. Johannes Ritter, Sr. was born 17 February 1743 and died 18 April 1816. On 29 April 1768 he married Maria Elisabeth Keck, born 15 April 1747 and died 02 June 1813. She was the daughter of Henry and Hannah Keck. They were one of the first settlers of West Beaver Township, Snyder County, Pennsylvania. Johannes was a Farmer and Inn Keeper. He marched to Fort Bedford in 1779 with Capt. John Rutherford's Company in the Revolutionary War.
In the Ritter Family book, researched and written by Larry Knox of Ohio, there are photographs of the graves of Johannes and Maria Elisabeth. The book also includes photographs of the church. Johannes and Maria Elisabeth’s son, Daniel Ritter, was the first child baptized in the church.
I wanted to go to the cemetery myself. The friendly librarians at the Snyder County Historical Society were very helpful, giving me directions and tips to finding the cemetery and the stones in the cemetery.
Driving to the cemetery is an adventure in itself. The roads have many sharp elbow turns and there is good reason the word ‘Ridge’ is in the cemetery’s name. As a person who does not like high places I had to be brave to master the roads.
At the cemetery there is a small stone building with information about the cemetery. Behind glass there are papers tacked up with a long list of the cemeteries residents. Beside this is a diagram of the cemetery to help locate headstones. With the photos of the headstones from the book by Larry Knox, the pointers from the Snyder County librarians and the diagram in the little stone house I set off to walk, with respect, through the graveyard.
I was very happy to locate the tombstones. I took several photos of the stones. I was surprised to find engravings on both sides of the stones. Both stones record they had been married 45 years, had ten children, 5 sons and 5 daughters. They are written in German.
Hier Ruhet
Johanes Ritter
Er Warde Geb.
Den 15 Marz 1743
Gezengt 10 Kinder
5 Sohne and
5 Docheter In
Der Dochter In
Der Ehe Gelebt
45 yahr
Gestarben
Den 18 April
1816 Alt 73
Yahr 1 Monut
And 3 Tag 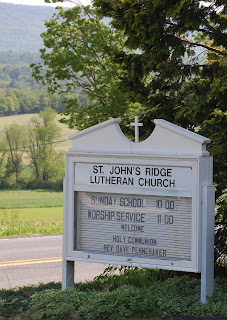 Due to time constraints I did not look for the other Ritters residing there. I will save that for another trip.
Posted by Colleen G. Brown Pasquale at 4:00 AM