Sometimes a random genealogy search can take you to a place you had not anticipated. While looking for information about my Great Aunt Ina L. (Brown) Alford, I found these newspaper accounts of the deaths of two of her grandsons, sons of Bruce L. Alford.

On 7 November 1959 Ina’s two grandsons, Bruce David Alford and Roy Edwin Alford, and their wives were traveling in a car north on US Route 75 near Ennis, Texas. For reasons unexplained in the newspaper accounts of the accident, their car collided head on with a pickup truck containing four people. The highway patrolman who responded to the scene of the accident said, “the two vehicles met with such force that they were ‘welded’ together.” Bruce, 22, and his sister-in-law, 17-year old Mary, died instantly. Bruce’s wife and his brother were unconscious and taken to the hospital. Roy Edwin Alford, 20 years old, died the next day. Roy and Mary had a little son, Billy Dwayne Alford who was not in the car. Bruce’s wife was the only one in the car to survive the accident. There was a combined funeral service for Bruce, Roy and Mary Alford and they were buried in Laurel Land Memorial Park. This terrible accident must have brought sorrow to all members of the Brown and Alford family. 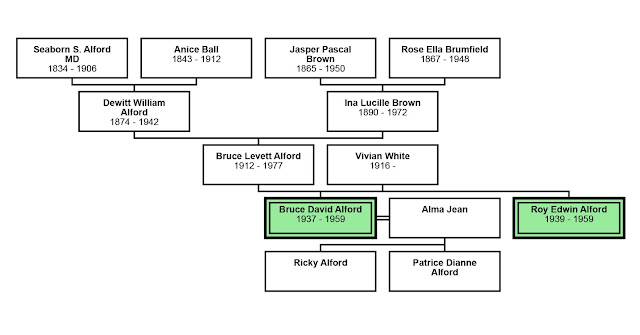 These three newspaper articles tell the story as it unfolded. Other newspapers also reported the accident but they give no additional information.

Ennis. Nov. 7. Two persons were killed Saturday night and six others were critically injured n a grinding, head-on collision of a pickup truck and an automobile on U. S. 75 five miles south of Ennis. The dead were identified as Bruce David Alford, 22, and his sister-in-law, Mrs. Roy Alford, 17, both of Irving. Both were occupants of the automobile. Three of the six taken to Ennis hospital were unconscious. The injured included Roy Alford, 20, and Mrs. Bruce Alford, 22, the other occupants of the car; Woodrow Wilson Morehead, 36, R. J. Rutledge, 59 of Houston, and Joseph Starr of Irving. The Moreheads, Rutledge and Starr were in the pickup. Mrs. Bruce Alford, Mrs. Morehead, and Starr all were unconscious. A hospital spokesperson said the condition of all six of the hospitalized was critical. Highway Patrolman R. H. Pecot of Ennis said the two vehicles came together head-on. Both were demolished. The Alford car was traveling north towards Irving.

Ennis. Nov. 8. Roy Alford, 20, of Irving died in a hospital here Sunday, the third person to die of injuries received Saturday night when a car and a pickup truck collided head-on. His wife, Mary, and brother, Bruce, driver of the car in which they were riding, died instantly in the crash on U. S. 75, five miles south of Ennis. Of those in the car, only Mrs. Bruce Alford survives. Her condition and the conditions of four persons in the pickup were described by a hospital spokesman Sunday as satisfactory. Those in the pickup included Woodrow Wilson Morehead, 36, and his wife, Laura, both of Irving, and R. J. Rutledge, 59 of Houston and Joseph Starr of Irving. The Alford car with its four occupants was traveling north towards Irving when the collision happened. Highway Patrolman R. H. Pecot of Ennis said the two vehicles met with such force that they were “welded” together.