Brothers served together. I knew it happened during the Civil War but I had not realized how often it occurred in other wars. The more I delve into the military service of our family, the more I find brothers who all stepped up to protect our land, our rights, our country. 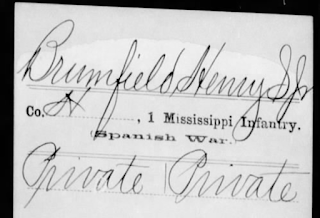 The Spanish-American War was an 1898 conflict between the United States and Spain that ended Spanish colonial rule in the Americas and resulted in U.S. acquisition of territories in the western Pacific and Latin America.

Dudley and Henry served in the US Army during the Spanish American War. They were in Company H, 1stRegiment of the Mississippi Infantry. Their second cousin, Willis Brumfield, served in the same company.[ii]

Entering the Army as the Spanish-American War developed, he served throughout that conflict. Some two decades later he was again a member of the infantry, in World War I.[iv]

Posted by Colleen G. Brown Pasquale at 2:00 AM