State & National Census Reports are filled with information for genealogists. Both the population & nonpopulation schedules give us insights into the lives of our ancestors. What have you found that is Surprising? Reassuring? Bewildering? Write your own Census Sunday post.

Locating Augustus Ceaser Gruissy [1840 – 1915 OH] in US Census reports has not been an easy task. He was always in or near Stark County, Ohio. However, finding my 2nd great grandfather meant finding creative ways to spell Gruissy. Various reports show his last name as: Grusey, Creesy, Greely & Gurnsey. The Gruissy family was from Germany and certainly could have had strong German accents that might help explain the change in their names by the census takers. 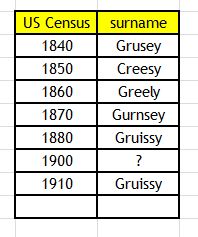 In 1860 Christian, his wife and children were still in Sugar Creek. Christian was a cooper. His son, Augustus, was 20 years old. The family name was now listed as ‘Greely’.

By 1870 Augustus was head of his own family in Wayne County, OH. His name was written as ‘August Gurnsey’. Augustus was a 30 year old carpenter and married to his second wife, Esther Barbara Wolf.

The Medina County, OH census taker in 1880 actually got the surname right! Augustus Gruissy was a peddler with five daughters and a crippled or disabled wife.  I have been unable to find the family under any of spelling of Gruissy for the 1900 report. Maybe I am not getting creative enough.

In 1910 Augustus was married to his third wife and back in Stark County. Happily he was once again ‘Gruissy’.

When searching for your surnames don’t disregard a name just because the spelling is not exact.

Good advice. Many of our oldest ancestors had limited education and might not have known how to spell their own name, so census takers relied on what they heard, often just guessing at spelling. The German accent especially can be seen reflected in d/t and g/c spellings. And the French "et" often shows up as a "y."