My great great great grandfather, Edward S. Brown, was born 26 July 1806 in Liberty, Georgia. About 1835 he married Mary Polly Spurlock. His children [born 1836 – 1844] were born in Amite County, MS. In an attempt to discover more about Edward I purchased:

This is the fourth of these map books that I have purchased. I love these books! They have led me to great family discoveries in the past. In these books land patent information is given and indexed by surname. I quickly found Edward Brown on two of the maps. On Map #10 he owned four sections along Robinson Creek. On Map #21 he owns two sections. All these land patents date to 10 November 1840. I also found William G Brown owning land adjoining one of Edward’s sections. This could be Edward’s nephew, son of his brother James G. Brown.

The discoveries did not end there. Mr. Boyd’s book notes that my ancestor purchased this land as part of an Act of Congress that authorized on 24 April 1820 “Cash Sale Entry 93 Stat. 566). An online search explained this act: The Cash Entry Act of April 24, 1820 (3 stat. 566) allowed the outright purchase of federal land. It reduced the minimum size of the tract from 160 to 80 acres. Additionally, the act required a down payment of $100 and reduced the price from $1.65 to $1.25 per acre.

Once there “go to the ‘Research’ page, and click on the ‘Land-Law’ link.” I followed Mr. Boyd’s suggestion. I soon found myself reading the search options at the

I put in the information for Edward S Brown that I had discovered in the book of maps. Edward S Brown came up with the date, Doc #, State, County, section, etc.

I clicked on the accession number. The next image focused on Edward.

On this screen I found the total acres 153.39 purchased. I clicked on the tab for ‘patent image’. When this opened I was quite excited to see the certificate, signed by President Martin Van Buren, made out to Edward Stewart Brown. I did not know his middle name before! 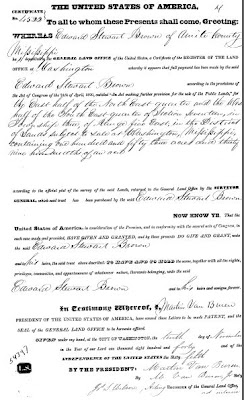 I was very happy to learn something about this ancestor because I had very little information about him. I did a second search at the Bureau of Land Management website inputting the information on the second map. Edward Stewart Brown had made a second investment in land on 1 June 1859. I thought this might be an error but looked carefully and saw the details & certificate.

Family records had shown that Edward died 7 May 1856. As far as I know he had five children, none of them named Edward. In 1860 his wife was a widow. I am going to see what else I can find to verify his death date. He did not have a long life but it looks like he made it past 50 after all.