This prompt comes from Amy Johnson Crow at her blog, No Story Too Small. She suggests we write once a week about a specific ancestor. I began with my grandparents and am working my way back in time. 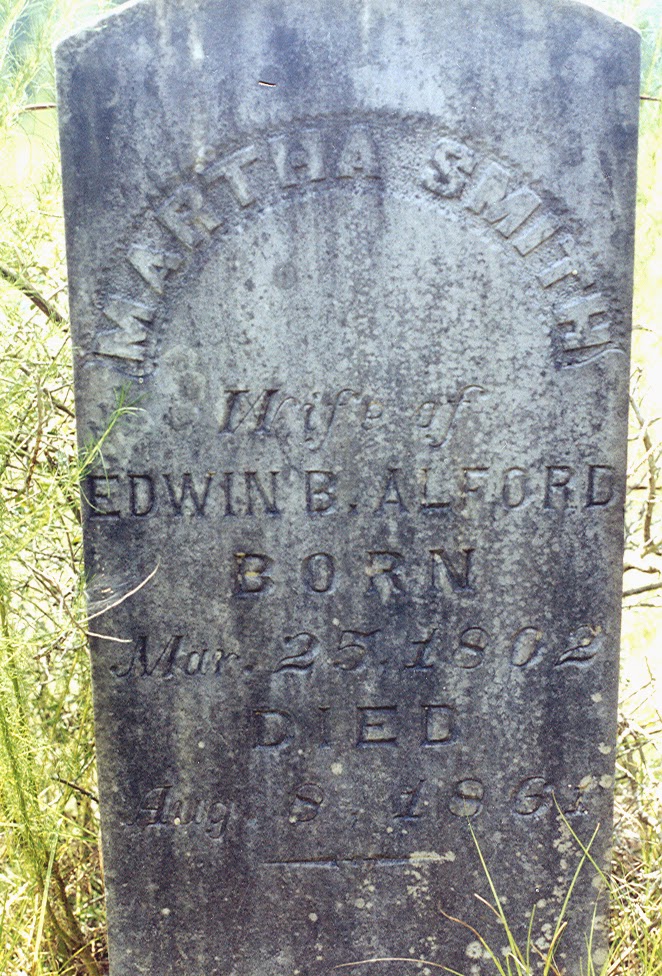 Grandmother was a well-chosen wife for him. Married at the age of sixteen years, she was mother before she was eighteen, had twelve children, all of whom lived to be grown except one that died in infancy.[5]

Two of Martha’s brothers lived near Martha & Edwin. Wyatt Smith & Calvin Smith also lived in in the Simmonsville & Progress area.[6]  The 1850 Census report shows Edwin as a 58 year old farmer. Martha still had 5 children at home. Sons, Jeptha and Seaborn were farm hands.[7]
Martha & Edwin are buried in the Edwin B. Alford Cemetery. The small cemetery is on a gravel road, one and one-half miles southwest of Silver Springs Baptist Church and 3/4 mile north of the Louisiana line.  "Martha Smith Wife of Edwin B. Alford BORN Mar. 25, 1802 DIED Aug. 8, 1861".[8]  It is directly by the roadside on a small hill.  Visiting the cemetery in August 1997, it was difficult to see the gravestones from just a short distance away because of the weeds and brush grown up all around and through the site.