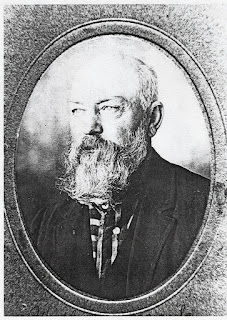 My second great grandfather was born 172 years ago today. He was a colorful figure. My grandmother, Ivy R (Mark) Brown, remembered her grandfather. In 1994 she told me about his house in rural Wayne County, Ohio and shared a photo of a very small log house that did not look like it could contain 14 children.

"I remember their place. It wasn't a very big place but they always had a good garden and a lot of chickens. Chickens were out back. In those days there was a lot of hunting. Like rabbit, turkey, wild turkey and such things. They had a lot of fishing. There was a big creek right by their house. They could fish."

The rifle William carried during the Civil War is still in the family. My grandmother talked about his military service.

William Mark "was on Look Out Mountain in Tennessee. A tornado came. A big plank slammed right into him; into his stomach.  He was never well after that."

My grandmother told me about his death.

"…my grandfather lived in that house and he wasn't well enough to do much. He used to go for walks. He loved to be outside. So, this one day he went for a walk and he come back and he told Grandma he had walked further that day than he had for a long time.  And she [Elidia Rebecca (Ritter) Mark] said, 'Well, sit down a few minutes. Dinner isn't quite ready.' And he sat down and when she went to call him, he was dead."

Although he is gone stories about him continue in our family.