Amy Johnson Crow challenges us to remember our ancestors and their families through this task: 52 Ancestors in 52 Weeks. I completed ’52 Ancestors’ in 2014 & here I go again. This post is in response to that challenge. The topic for this week is ‘I’D LIKE TO MEET. 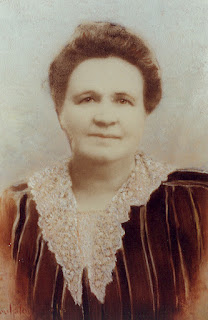 I’D LIKE TO MEET Mary Jo. She died just three months before my mother was born. Over time I have uncovered many facts about her life. I know she was born in Ireland and came here in 1885. I know when she was married and the names & birthdays of her seven children. But I’d like to know more than mere facts.

I would cover my table with the Irish linen tablecloth and set it with the delicate china plates and tea cups, all of which I inherited from her daughter. I'd brew some Irish tea; I'd lean in and look into her eyes and ask her what it was like to pack her trunk and say good-bye to her brothers, sisters and her parents when she left Ireland. Was she excited about the adventure or was she desperate to find a job opportunity? Did it cross her mind that she would not return to that beautiful green country for many years?

I’d pour us another cup of tea and I’d ask her about meeting Michael Coyle. Her youngest daughter told me that Mary Jo & Michael were living in the same boarding house and they met on a staircase where it was love at first sight. What was the courtship like? What was it like to get married in New York with her family far across the ocean?

I’d ask her what it was like to be the mother of seven children in New York City in the early 1900s. Her mother was across the ocean. She could not even pick up a phone and call her mother to ask how to handle potty training or how to get her children to sleep through the night. Who did she turn to when she had questions about childbirth and child rearing? Her cousin, who had from Ireland with her had no children. What was motherhood like at that time? What were her fears for her children and her joys? I’m sure it was both different and the same as my days of child rearing. I’d like to hear about the times Mary Jo thought were most precious. What was my grandmother, her oldest child, like as a child, a teenager and as a young woman?

I’D LIKE TO MEET Mary Jo to learn more about her life between the facts and I’d like to tell her about my life. I am now older than she ever became. I can tell her how joyous it is to be a grandmother, something she never achieved. It would be nice to sit and sip tea and share some Irish brown bread and talk about life. 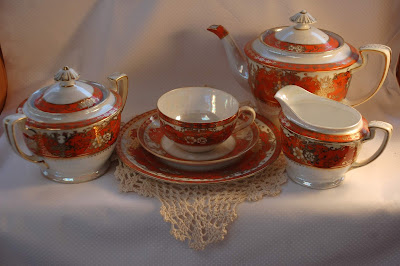 This china once belonged to Marion Coyle McCall.
It was a gift from her sisters when she married James J. McCall in 1931.