My parents, Delbert Keith Brown & Alberta Joy Gardner,  were married on 8 August 1948. My mother told me selected the date for two reasons: August was less likely to rain and she liked the numbers in the date 8/8/48.
My grandfather, Nathaniel Gardner, had died 7 December 1944 so he was not there to give his daughter away or to help with the expenses. Helen  (Coyle) Gardner made a small salary in a fruit packing company in Germantown. She raised chickens for the eggs and grew vegetables. Joy worked as a telephone operator. Between the two of them they were able to put on a very nice wedding. Joy was very talented with the sewing machine and made her own wedding dress. 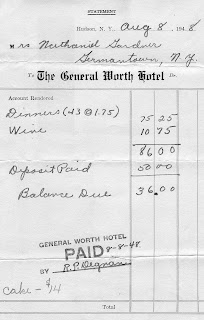 The ceremony was held in the Rectory of the Roman Catholic Church of the Resurrection in Germantown, New York. At that time, because Delbert was not a Catholic they were not allowed to marry next door in the church. After the ceremony they drove to nearby Hudson for the reception at the General Worth Hotel. We still have the receipt for 43 dinners at $1.75 a meal, wine and a cake for $14. Notes written by my grandmother and saved by my mother tell us dinner included: Juice, Roast Vermont Turkey, Dressing, Mashed Potatoes, Peas, Salad, Rolls & Butter, Coffee, Ice Cream & Cake. These are great details about the special day that I am glad to have as I remember that today is their anniversary.

Posted by Colleen G. Brown Pasquale at 8:21 AM