Book: The Formation of the North Carolina Counties, 1663 - 1943; A NGS Conference Purchase

During the recent NGS conference in Raleigh I purchased several books to further my genealogical research. Most of those books were recommended by the speakers during the sessions I attended. The speakers mentioned the books in their talks or listed them in their syllabus or both. I uncovered others during my Exhibit Hall visits. I plan to closely analyze these books over time but here is a general idea of the contents of one of those books [more to come.]

Both David M. McCorkle and Jeffrey L.Haines listed this as an important book in their syllabus for their sessions at the NGS conference. If you have done any NC research you know that those county boundaries were fluid rather than stable. 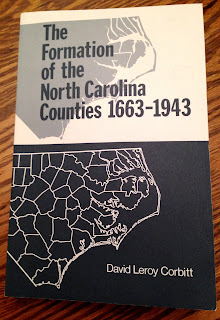 As soon as I heard about this book I knew I had to find a copy in the Exhibit Hall. When I browsed through it I saw the list of counties, the details for each and the maps and I decided I wanted a copy.

Once home again I began using my new knowledge of land transactions and the new books I bought at the conference to expand my knowledge of Lodwick Alford, c 1707 – cc 1800, my 5th great grand uncle. He made multiple land transactions in North Carolina. The earliest transaction I have for him is Nov 1740 in Edgecombe Co., NC. When Granville was formed from Edgecombe the land entries, warrants, etc. began there. In 1764 Bute County was formed from Granville. Naturally, I uncovered Lodwick Alford purchasing land in that county. Every few years Lodwick was buying or selling his acres.

The last transaction I could find was 1778 in Bute, although Lodwick lived for several years beyond that date. It did not seem to be in character for him to stop these deals. So I took out Mr. Corbitt’s book and discovered that Bute County was named after the Earl of Bute who was very unpopular with Americans and so the county was abolished. It became the counties of Warren and Franklin. I turned to Franklin County and found Lodwick Alford there! I would not have thought to look there without this wonderful reference book.

Anson County where I was born once stretched all the way to the Mississippi.

Wow. I am amazed at how many times those counties changed.